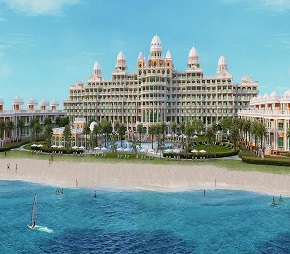 What are the key details of the project?

What are the amenities available here?

What are the location advantages here?

Emerald Palace location is Palm Jumeirah a notorious palm tree-formed island in Dubai is definitely the biggest man-made structure on the planet. Palm Jumeirah is one of the three in the archipelago of islands called Palm Islands, the other two being Palm Jumeirah and Palm Deira meant to grow Dubai's shoreline by a sum of 520kms. With its dispatch in 2001, the undertaking turned into a medium-term all the rage and the property recovery began quickly. Because of that, Palm Jumeirah had 4000 extravagance manors and lofts available to be purchased sold out. From that point forward, the island has formed into a showy and exciting neighbourhood and wind up one of the significant traveller and nearby attractions of Downtown Dubai. The place is presently a one-stop for everything rich and glitzy going from eateries and burger joints to shoreline clubs with spas and dance club.

A note on the developer

Emerald Palace Group, a key accomplice of Kempinski Hotels S.A., is a piece of a gathering of related organizations, which have been effectively creating and building private activities in Ukraine, UAE and Russia since 1996.

The Group has finished around 40 ace arranged properties containing in excess of 10,000 private units, spread over in excess of one million square meters. At exhibit, the Group has 8 new advancements under development, with a further 10 at venture arrange.

What are the USP's of the project?

Everything you Need at One Place

Get Assisted by our Top Rated & Trusted Agents
Financial Support

Emerald Palace Group, is a strategic partner of Kempinski Hotels S.A and is part of a group of various associated companies, which have been fruitfully developing and constructing Emerald Palace Group real estate projects in UAE, Ukraine, and Russia since 1996.

The Group has completed around 40 master-planned properties comprising more than 10,000 residential units, spread over more than one million square meters. At present, the Group has eight new developments under construction, with a further ten at the project stage.

From offering world-class projects to being one of the emerging groups, here is why Emerald Realty is the one.